Every year on November 1st and 2nd Mexico explodes into a festival of colours and celebration – Dia de los Muertos or the Day of the Dead. It might sound a bit bizzare and morbid for the typical Westerner but it is in actual fact over a thousand year old eccentric human believe celebration. We were lucky enough to meet up with our South African friends, an Italian and two Americans in a small colonial-era touristy town San Miguel de Allende for this peculiar festival. San Miguel is a picturesque town with cobblestone streets, magnificent old buildings an interesting town square and a beautiful old church. Dia de los Muertos goes back 4000 years and can be traced back before the Spanish invaded Mexico in 1519. Before the Spanish invasion, many indigenous cultures like the Olmecs, Mayans, and the Aztecs made up the Mesoamerican civilisations that flourished in Central America many, many moons ago. These cultures shared a common belief in the afterlife. They celebrate the lives of the deceased with food, drink, parties and activities the deceased enjoyed in life. They believe that when people die, they do not cease to exist — instead, their soul carries on to the under world and the beginning of a new life. People will set up altars with offerings, clean and decorate graves, hold all night graveside vigils, recall stories of the past and even have bands playing at a loved one’ grave. Confectionary sugar skulls (Calavera) and other sweets are common gifts. Everywhere there are candles, believed to light the new path, and incense burning. 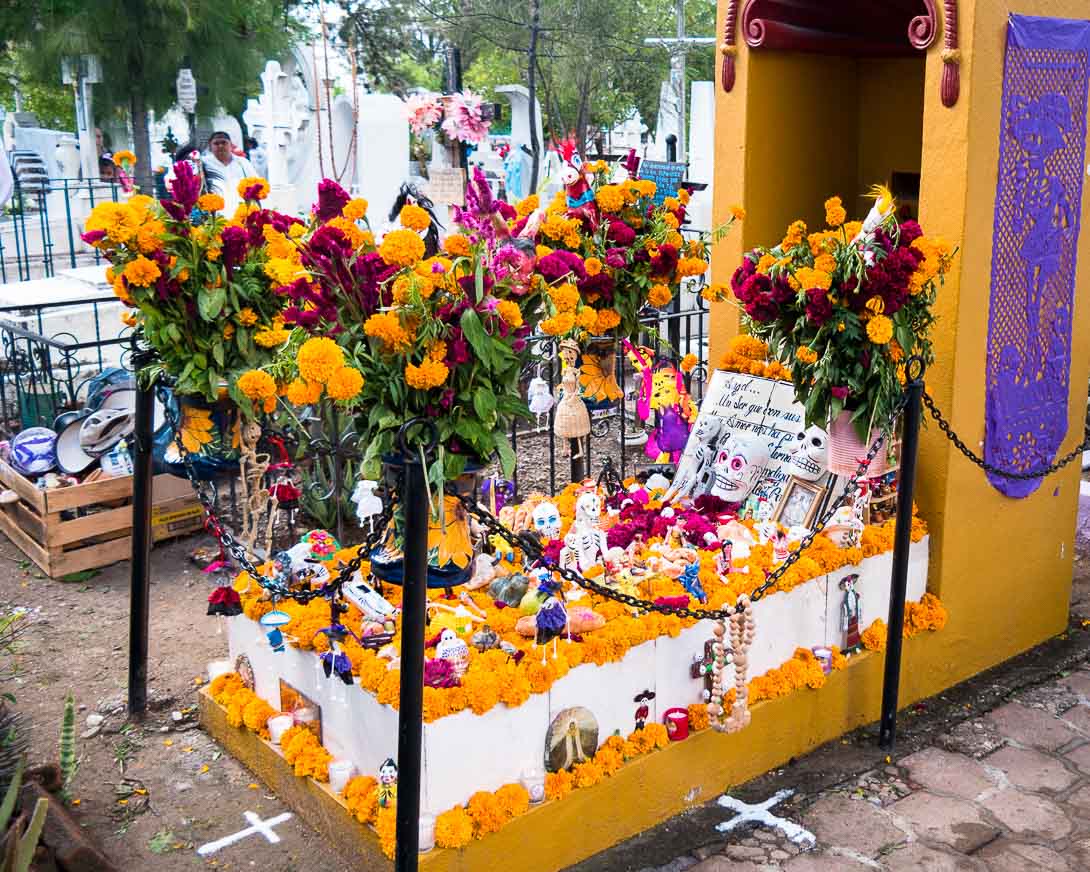 Dia de los Muertos is a rethink of the nature of life and death and results in a celebration of death and not a fear of death. Death is seen as the continuance of life in the world beyond the grave, maybe similar to the way the old Egyptians believed. To be more specific, the old Aztecs honoured the goddess Mictecacihuatl also known as the Queen of the Underworld or Lady of the Dead. The underworld was know as Mictlan the place where people go in the afterlife. They believed that the deceased preferred to be celebrated, rather than mourned.

The role of the goddess was to guard over the bones of the dead and preside over the ancient festivals. Mictecacihuati was shown as a de-fleshed body with a gaping jaw to swallow the stars during the day. Mictecacihuatl found a new identity over time as the modern-day La Calavera Catrina, also known as “Dapper Skeleton” or  “Elegant Skull” It is a 1910–1913 zinc etching by famous Mexican printmaker, cartoon illustrator and lithographer José Guadalupe Posada. Catrina depicts a female skeleton dressed only in a hat worn by the upper class Europeans in her time.

History tells us that the Spaniards thought the Aztecs were Pagan barbarians.  They tried to force, as most land grabbers do, their Catholic believe down the Aztecs throats. Well that did not go down well, an the Aztecs showed them a big up-yours. In the end they made a compromise and shortened the length of the Mictecacihuatl festival to two days which conveniently corresponded with two of their own Catholic holidays: All Saints’ Day and All Souls’ Day.  Also the same time as the USA’ Halloween.

The famous calacas (skeletons) and calaveras (skulls) are seen everywhere on masks, artwork, candied sweets and dolls.  Mostly portrayed as creatures dressed in fancy clothes, enjoying life. In San Miguel a jovial happiness was in the air, celebratory atmosphere everywhere. The town also a bit over run with both American and local tourists. Pubs and restaurants overflowing.

Small vendors were making their yearly ‘killing’ in selling art and food on the bustling cobblestone streets to crowds trying to score another painted skull or item at a good price. Early evenings the town really came alive with hundreds of people gathering on the town square. The plain would erupt in a cacophony of sounds, dance and brilliant colours. This must surely be the biggest dress up party in the world on those few days. Everybody is in the mood and most people get their faces painted to fit in and those who quaffed down too much tequila ended up with unwanted tattoos! Throughout the night the party continues with bars overflowing with cheerful people. While Dia de los Muertos have turned into a true world festival with colour, flavour and fervour the original idea are still practiced by Mexicans. It is a wonderful event to witness but bare in mind to respect the culture and people.